A New Old Trend from Broker NordFX: Trading in Gold


With the cryptocurrency market falling, the noble yellow metal can become one of the most attractive tools for financial traders and speculators.

Gold instead of Bitcoin?

Undoubtedly, the most common thing for Forex traders is trading currency pairs and, in the first place, the majors: US dollar, British pound, Euro, Japanese yen.  Transactions with these fiat currencies used to account for the lion's share of the broker companies’ turnover until the middle of last year, when they were gradually replaced by bitcoin, ethereum, litecoin and other digital altcoins.

However, after the sharp drop of the bitcoin, the rush demand for virtual currency began to decline and many traders were once again facing the question how to increase their profits.

And it is right now, in autumn 2018, that it is simply necessary to recall such a profitable and time-tested instrument as the gold. After all, it is the gold that can provide stable earnings for traders.

"A Cobblestone in a Box", or Some Statistics

A few years ago, the Wall Street Journal tried to convince the readers that the gold ceased to be a safe haven, keeping you away from crises and inflation, and called this precious metal "a cobblestone in a cardboard box". The Washington Post appeared at the same time with a similar forecast, saying that "the gold was doomed". And both these respected publications were wrong.

It was seventeen years ago, on April 2, 2001, that the gold prices fell to $255.3 per troy ounce, reaching their bottom, after which the gold rallied for a decade. Such dynamics have not been observed for any other asset in the financial market.

In 2011, the gold broke through the mark of $1,900 per ounce, and it seemed that the iconic $2,000 was the reality of the nearest months. But ... then, it started as sharply, as an avalanche, to lose value. Optimists called this collapse a correction, while pessimists said it was a return to the real value. (Don't you agree, it reminds us of the situation with the bitcoin).

According to some analysts, the new bottom could be somewhere around $350 per ounce, but for all past years the price of the yellow metal has never dropped below $1000.

If you look at the World Gold Council data, it can be clearly seen that the interest in this precious metal, as a reliable haven in the moments of financial and economic storms, is constantly growing. The demand for it grew by 42% just in the first three months of 2018.

The Central banks of many countries, such as Russia, China, India and a number of others, have been actively replenishing their gold reserves in the last ten years, seeking to diversify their portfolios. Thus, for example, Russia's gold reserve has grown by 200 tons of the yellow metal in three years. In the context of geopolitical tensions in the Middle East and the crisis in relations with the US, the Central Bank of Turkey has also relied on the gold, having bought 86 tons last year.

Thanks to China and India, the demand for the gold is also growing in jewelry making and in industry. The demand for jewelry alone in India has exceeded 560 tons, and in China - 645 tons.

In 2017, the volume of gold reserves in the 10 largest countries amounted to about 30 thousand tons, and its value approached $12 trillion. (For comparison, the total crypto market capitalization in September 2018 is about $200 billion).

Why do we publish these figures? We just want to show that, unlike bitcoin and all kinds of altcoins, the gold has a real, not virtual, value, and therefore it is an excellent tool for exchange speculation, without any risk of falling to zero.

How to Profit on Gold

There are a lot of trading strategies that allow you to profit from transactions with the gold. But, probably, one of the most reliable and profitable strategies is trading based on the analysis of the current world macroeconomic and political trends, says NordFX leading analyst John Gordon.

In this case, the trader needs to know that the price of this precious metal largely depends on the following factors:

When starting trading in precious metals, it is necessary to bear in mind that such transactions with Forex brokers differ from transactions with traditional currencies. Thus, for example, the volume of a lot here is measured not in money, but in grams or kilograms. 1 lot is equal to 100 troy ounces, in other words, 3.11 kg of this noble metal. That is, with the current price of $1,200 per 1 ounce, in monetary terms, the volume of 1 lot will be $120,000.

It is clear that the absolute majority of traders do not have this amount available, so the need to use a credit leverage becomes obvious. The broker NordFX offers using the leverage ratio of up to 1: 1000 on three types of trading accounts: Fix, Pro and Zero. And given the fact that the minimum transaction size at NordFX is 0.01 lots, the trader only needs about 1.5 dollars to enter the precious metals market. 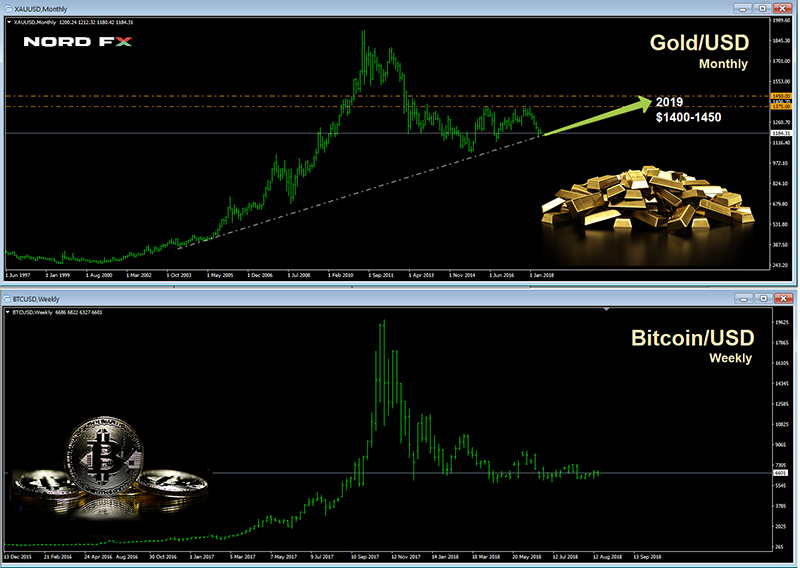 As for the forecasts for the upcoming 2019, the overwhelming majority of experts are betting on the growth of the gold price. "It seems to be ready for the next stage of the bull market, which began around 2000," writes Hubert Moolman at 24hgold.com, "breaking through the $1375 level will be the definitive confirmation of this."

According to ABN Amro senior analyst Georgette Boele, the gold price in 2019 has a chance to rise to 1400 dollars. "By the end of 2018 the US dollar and 10-year US Treasury bonds will reach a peak, and then will start to decline. The fall of the yuan came to an end and a significant escalation of the trade conflict was prevented. Therefore, the price of precious metals is likely to be restored, "- says Bole.

As for a longer-term perspective, here we should pay attention to the forecast of Australia and New Zealand Banking Group. According to the ANZ chief economist Warren Hogan, the revenue growth in Asia will have serious consequences for the gold market, and by 2025 the price could rise above $2,000.

One of the most courageous forecasts has been given by the Gilburt Financial Services manager and the wave analysis specialist Avi Gilburt. It should be noted that he had accurately predicted the completion of the correction in 2015 and the transition to an important phase of the bull market, which, in his opinion, could last for the next 50 years, raising the gold price to $25 thousand per troy ounce!